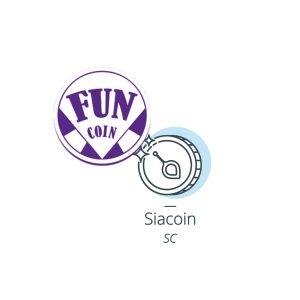 New Year is marching forward. 2018 may be the lucky charm for many altcoins. Some of the backline altcoins have the potential to make an impact on the market. Siacoin and FUN are experiencing a good time, hope that the upcoming year will be great too.

It is one of those coins with a possibility of having a charming year ahead. Among 700+ Altcoins, Siacoin has found itself within top 40 with an approximate market cap of more than $200 million dollars. Currently, about 28 billion coins are being circulated in the market which will reach 40 billion in near future.

A few coins have their products in the market and Siacoin is one of them. A great facility provided by it is safer storage space which is decentralized and, is secured from hackers. People will check it out besides other prevailing cloud services like Amazon, Microsoft, and Google because its service is cheaper.

To have the service, users will have to possess minimum 2,000 coins and can rent out storage space to other users for a fee. It can be predicted confidently that the value will increase gradually because of a limited amount of both storage and coins.

It was launched by Nebulous Inc. The product was given more priority to marketing. Therefore there is a scope for improving the marketing arena which will increase the service quality. Good quality product and perfect advertisement will catch the sight of the users. Siacoin has got competitors like Maidsafe and Storj. Hope that Siacoin will be able to run on the track at the same pace it has now.

The coin is shortly named FUN which is a bit funny! Jokes apart, FUN has collected about $26 million USD from an ICO organized a few days back. It has become familiar to the users very recently and trading at approximately $0.03 per token at present. About 3 billion FUN coins are now available in the market and the number will be increased up to 17 billion.

FUN is providing a charming facility, casino based on blockchain which is surely interesting to the users. Already there are some scams providing online casino facility and they target users with less experience in this arena. They often loot the money even one wins in gambling!

Blockchain technology assures a secured casino where anybody possessing tokens can take part. As all transactions are recorded in a public ledger, there is nearly zero possibility of cheating or being cheated.

Noteworthy part is that FUN has already launched a live demo where one can try their casino. Before them, others tried to bring forward blockchain based casino but it was not that successful. But the demo casino launched by FUN is running quite smoothly. They will gather more attention when their product will be more equipped and attractive.

The success of FUN casino can be predicted easily as it is much secured being based on blockchain than the existing ones. Still, a lot of people are not much familiar with stuff like blockchain, cryptocurrency as these terms are quite new to them and a bit hard to understand. Therefore there is a bright future ahead for FUN when people will come to know about the security and facility they are providing. Let us hope for the best.

How to Invest in Crypto Without Buying Cyrptocurrencies

My Quest to Financial Freedom – Chapter 1

Why Did Litecoin Crash?

Can We Trust The Crypto’s Exchanges

My Quest to Financial Freedom – Introduction