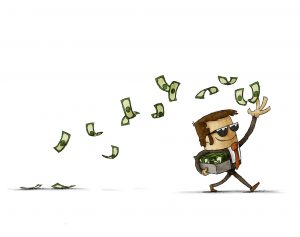 What is Fiat Money?

Fiat money is a currency which is declared legal tender by the government and has no intrinsic value.

The idea of fiat money has arrived as an alternative to commodity money and representative money to ease the way of payment and exchange of value.

Why was it invented?

Back at the time, people used to exchange commodities, like grains, fur and even living animals, as money for goods transactions. During this process, they had to face various obstructions: mobility, divisibility, accountability, matching of a right price and more. Demand used to very resulting variation in the value of the same good.

For example, Mr. X has a cow and he is willing to have 2kg of rice from Mr. Y who has surplus rice. Obviously, the cow is relatively more valuable than 2kg of rice. Therefore, the unit of exchange is not appropriate.

If the cow is slaughtered and Mr. Y is given his fair share, here comes the storage problem as it cannot be stored for future for a long time.

After that arrives the time of exchanging precious stones and metals which were valuable for their scarcity. Gems, gold, silver etc were used as the media of exchanging value. But they were out of the hand of general mass and their values were not stable.

And then came the currency

All these problems invited a more sustainable way that could overrule the barter system and representative money. Thus the idea of fiat currency came into existence. The term fiat is Latin that means “let it be done”.  A piece of metal or a sheet of paper can be fiat currency when it is approved by the proper authority and each and everyone acknowledge that it carries a certain value determined by the authority which can be different from the value of that paper or metal as commodities.

A little bit of history

In 11th century, fiat money was originated in China. The Song dynasty issued paper money for the first time and the use of it was widespread during Yuan and Ming dynasties. Since then, the idea of fiat currency was adopted around the globe. In Europe, Tally sticks were used as fiat currency due to the gold shortage.

During 17th century, beaver pelt was the medium of exchange in New France which is now a part of Canada.

New money is circulated in the economy when the central bank of a country purchases financial assets or lends money to any financial institution. This base money is then multiplied by the commercial banks by credit creation through fractional reserve banking that results in expansion of broad money that includes cash and demand deposits.

A little amount of Broad money is supplied in the form of physical coin or paper money.

In a nutshell, central bank and sometimes the treasury of the government hold the authority for the creation of new physical currency.

This is a term to describe a situation when the supply of currency is increased irrationally in the market. Hyperinflation, an extreme stage of inflation, was experienced by the Weimer Republic of Germany, Zimbabwe and many other countries.

Economists suggest that controlled inflation is good for a healthy economy. The stability is regulated by the monetary authorities by controlling monetary policies through open market operations like fixing interest rates, reserve requirements of banking etc.