Quick Overview on ‘What is Cryptocurrency’? 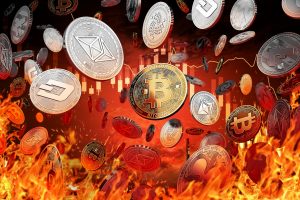 So What is Cryptocurrency?

Cryptocurrency or digital currency is an alternative to the real-world currency like dollar or euro.

First introduced in 2007, the cryptocurrency has no hard existence, it only exists in the virtual network. The total system of the cryptocurrency is based on the protocols of cryptography which functions through mathematical procedures.

During 2018 governments started to regulate cryptocurrency, their use, and transfer.

Bitcoin was the first cryptocurrency introduced in the system. The bitcoin system is based on a peer-to-peer cryptographic platform called the Blockchain (following a great video explanation by Anders Brownworth about blockchain on YouTube)

How does it work?

Every transaction made between any of the registered entity of the system is recorded in the blockchain.

The data is both transparent and encrypted at the same time. So, there are no chances of someone corrupting any transaction data. Every registered user in the system can monitor any transaction data at any time and from anywhere. It is the public ledger of the 21st-century technology that is free from any regulatory involvement.

There are no central authorities or third party authorization. Every user of the system holds the freedom of their own accounts.

The cryptocurrency network is operated by miners or programmers. They dedicate their computing power and solve mathematical problems to process the data into blocks, the functional unit of the blockchain. As a reward for their work, they are given bitcoins. This is the proof of work system that keeps the network safe and distributes the bitcoins among the network.

Over the years, several cryptocurrencies have been introduced as an alternative to bitcoin, all with a sole purpose of filling up the flaws of bitcoin. Different cryptocurrency operated on different blockchain network but their fundamental properties are same. Such as,

The true purpose of the introduction of cryptocurrency was to provide an alternative to the traditional fiat currency system. The idea was to build a financial system that is free from any national borders and regulatory authorities.

What is MyEtherWallet (MEW)?